Investments in long-term research and development (R&D) and precision agriculture will increase investment to GDP more than 30 times, Kyiv School of Economics (KSE) Professor Oleh Nivievsky said during a talk a panel discussion at Interfax-Ukraine on Thursday. .
“A dollar of research investment in the agricultural sector produces an average of $32 in long-term national wealth. Compared to investment in infrastructure, the figure is up to $5 per dollar invested in it. As a result, the potential for agricultural R&D is much higher than it appears,” he pointed out.
Moreover, according to the expert, for the Ukrainian conditions of investment in agrarian R&D with the simultaneous introduction of precision farming methods, this indicator can be increased by 10%.
The round table on the development of precision agriculture also brought together Olha Trofimtseva, president of the Ukrainian agri-food platform; Serhiy Sychevsky, Business Development Manager of Bayer; Dmytro Zaitsev, head of precision farming at Continental Farmers Group; head of the precision agriculture and telemetry department in Ukraine, Moldova, Scandinavia and the Baltic countries at CNH Ukraine Mykola Chornonos; Kyrylo Druzhinin, Innovation Director at Agrain.

“If the technology answers one of two questions: make a person’s working conditions easier or improve their results, then it already makes sense to study it. In addition, the area of ​​​​the field is studied, the crops planted there, the technology and the culture of production that we have, ”explained the representative of Continental, Zaitsev, on the approach to the introduction of agriculture precision.
The representative of the Agrain Druzhinin farm, in turn, clarified that the methods of introducing precision agriculture can differ significantly for farms with thousands of hectares in processing and for farmers with a reserve land of tens of hectares. According to him, another trend in precision agriculture will be a reduction in the number of workers in agriculture and a change in the demand for occupations: for example, now tractor drivers on a farm are more likely to perform the functions of operators controlling the autonomous operation of the machines.
“The progress we have in technology is just space. If you look at machines as a thing that does some kind of operation for you, you won’t see progress. But if you look at it as a way to facilitate work and reduce costs, then we have the fact of a technological revolution unfolding before our eyes,” Druzhinin stressed. 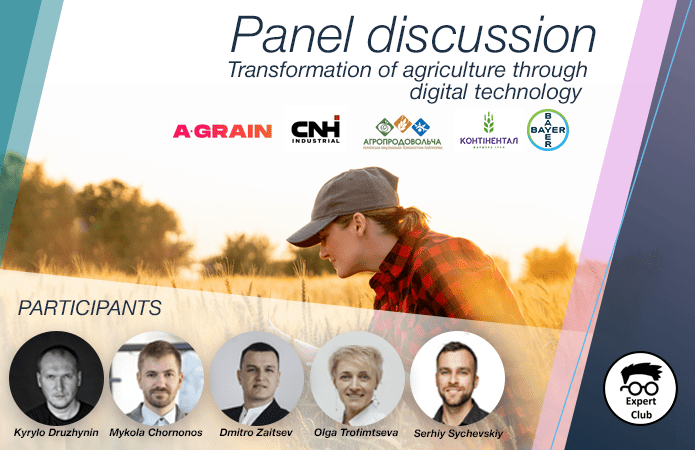 According to him, at present, Agrain has practically completed the transfer of equipment to the autonomous processing of fields, when agricultural machinery can move independently along the specified navigation lines not only in a straight line, but also turn around in the driveway.
Serhiy Sychevsky clarified that one of the problems with the widespread introduction of autonomous machines is the small number of innovative machines in Ukraine capable of generating movement data, which can be read and used by equipment from other manufacturers at the future. He cited Bayer’s estimates that in Ukraine only about 20% of combines and seeders can generate high-quality navigation data for autonomous operation.
“I will put a small accent: at the Agritech fair in Germany, we will offer a solution that we will also offer in Ukraine. This will increase the number of compatible combines that can generate such information in the field,” said Bayer’s business development manager.
The representative of CNH Ukraine, Mykola Chornonos, pointed to a significant shortage of personnel capable of developing the direction of precision agriculture, in particular specialists in the field of data analysis and machine learning. During the discussion, the participants supported the opinion that no educational institution in Ukraine prepares specialists for this industry, while the agricultural enterprises themselves are engaged in their training “from scratch”.
He also noted the need for the state to determine the strategic directions for the development of the agro-industrial complex and to initiate their development.
“If you look, in recent years there has been an increase in the service orientation of the agro-industrial complex. In fact, all manufacturing companies are moving towards cooperative service models with their end customers. One of the good cases where you can see this transformation is the drone market, which is growing every year. This year, if I’m not mistaken, their growth was 700%. Where else can you see this? said Olha Trofimtseva.
Despite such volumes of market growth, these companies are gradually shifting to a service work model, selling not only equipment, but also services for their maintenance.

Collaborating to improve agricultural research and education in northern Tasmania