Best day to get back to your dating apps in 2020

Comprehensive Report On The Arts And Crafts For Children Market 2021 | Trends, growth demand, opportunities and forecast till 2027


For Lionell Christian Lanuzo, studying in Italy was no easy task. For the Pinoy student, obtaining a degree in industrial chemistry from Istituto Tecnico Industriale Ettore Molinare in Milan and deepening his love for fashion paid off. Among the many reasons why this country is considered a Mecca for international students are affordability, culture and cuisine, and academic offerings. Lanuzo was able to taste them all.

Since graduation he has been making waves in the fashion world and making the Philippines proud. The “Bayanihan (community unity) spirit of all Pinoys” shines within Lanuzo as San Fernando, native of Pampanga won over the European public at the “Lange Nacht der Konsulate” (Long Night of the Consulates) in Stuttgart, Germany with creations in “capiz” (natural shells), “sigay” (another type of shell), aluminum foil, “barongs” (type of dress) with pearls and pearls .

He also collaborated with the Philippine Consulate General in Frankfurt this year in April. It was through a virtual exhibition called “GOLDEN TREASURES: Culture, Art and Tradition of our Filipino ancestors”To commemorate the 500th anniversary of Mactan’s Victory and the 500th anniversary of the Philippines’ participation in the first round the world.

Below, we dive into what led him to chemical engineering, why he turned to fashion design, and what studying in Italy is like:

Where does your interest in industrial chemistry and fashion come from?

I love science and I love to draw. I chose to get my degree in “Chimica Industriale” (industrial chemistry) because of its complexity and complexity. Maybe that’s also why I chose to venture into styling. 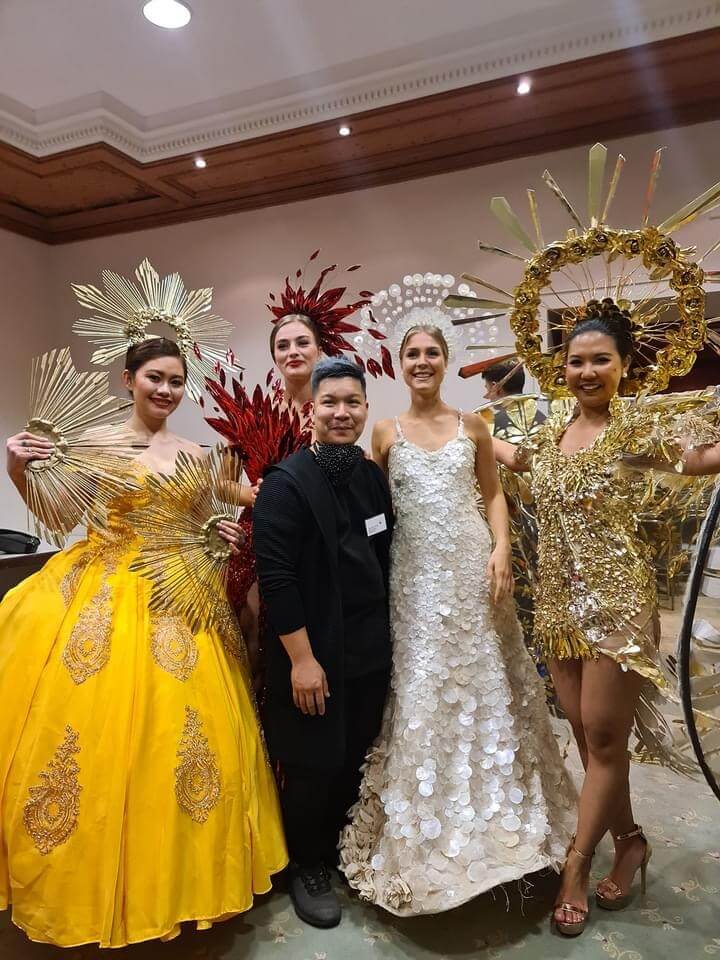 Just like industrial chemistry, I like to know the materials with which I work. From its composition and from there, create something from these materials. Studying chemistry has also allowed me to understand the patterns and flow of every design I make. It’s weird to connect fashion through chemistry, but that’s how it is for me.

Why choose Milan to study?

It wasn’t my first choice, but I guess under certain circumstances I ended up here. Back in the Philippines, where I graduated from high school, my parents decided to ask me to study in Italy.

It was not easy to move from one country to another, especially with the language barrier and the cultural difference, so it was a shock for me. Eventually, I was able to cope and complete my studies.

After your studies in Italy, tell us a bit about your professional background.

The truth is, I wasn’t really able to practice what I was studying. After I graduated, I started working as a receptionist in a hotel just to do something while waiting for some companies to respond to my applications. 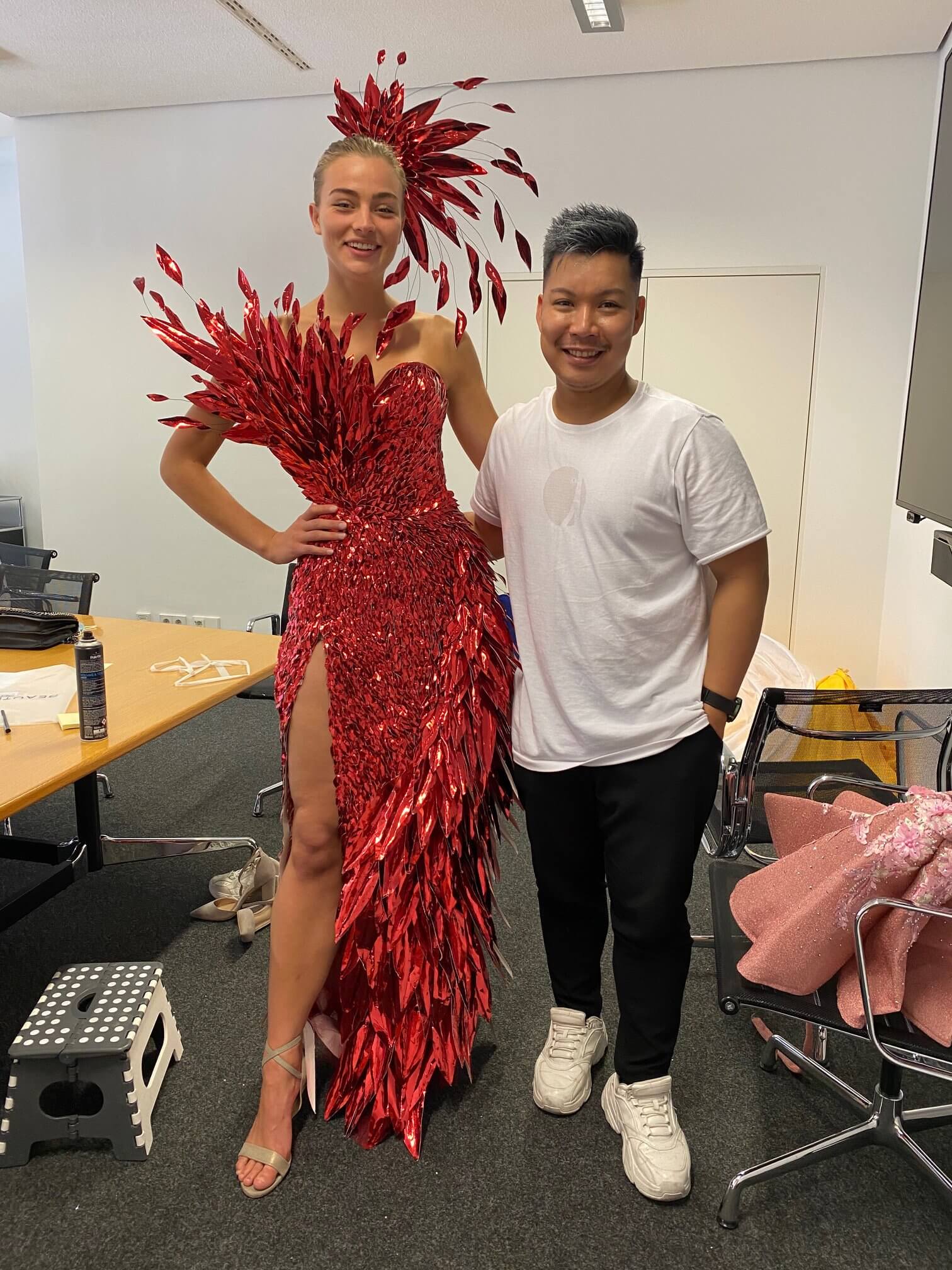 Thanks to a small hangar outside the design room in Germany, Lanuzo managed to set up his beautiful creations which impressed the director. Source: Lionell Christian Lanuzo

After a six month trial period, they gave me a permanent contract and I have worked with them for almost 11 years. Usually I’m asked why I waste time just being a receptionist when I can get a better job, but I’m happy with what I’m doing. I have the opportunity to meet a lot of people and at the same time having a boss who supports me and who ventures into design has been great.

Tell us about your favorite shows and where the inspiration behind them comes from.

Having only been in design for less than four years now, I’ve had the chance to do a few shows and travel a lot but there are two that stand out the most. One of them was when I won the best designer award at the multi-ethnic competition in November 2018, where I had the chance to represent my country.

I questioned my abilities all the time back then because I had stiff competition with 10 other countries and I also had no formal education in fashion design. To add further, the participating designers already had their own businesses, stores, and boutiques, which is a world of experience that I didn’t have. 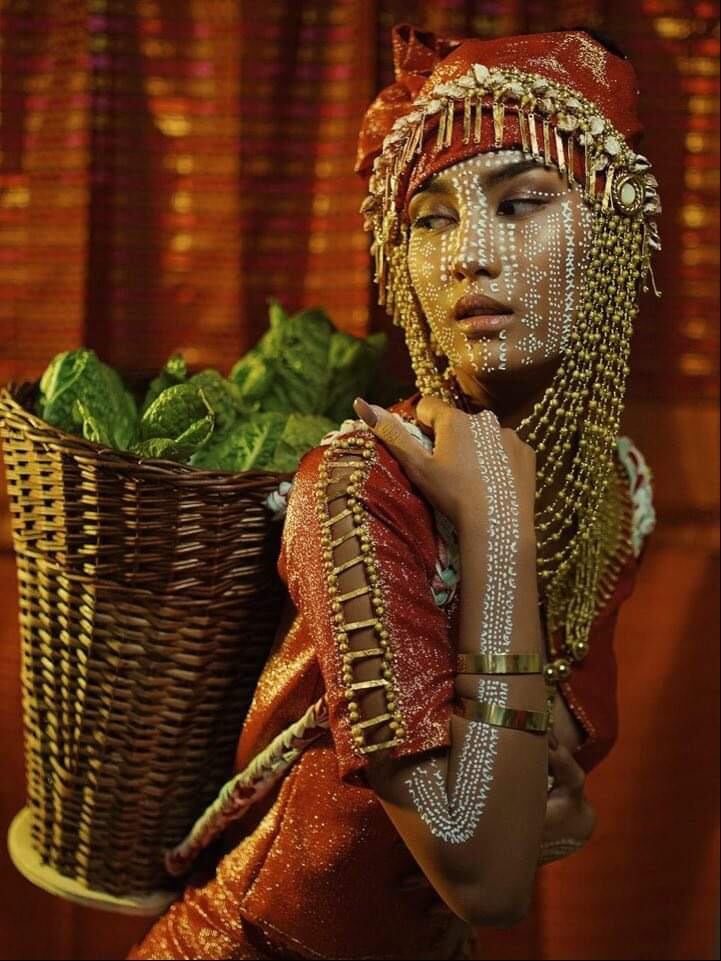 My team was denied a space in the area for the design, so we took everything to a shed outside the main hall and got everything ready there. I think it was a blessing in disguise as one of my designs has a five foot long trail and the other is delicate and fragile. So when the director told us we had less than five minutes, all the models and designers went to where my team was already.

The director saw my model and asked me what material I was using and where I had studied fashion. From there, I noticed that the mood had gone from friendly to more curious. Finally, our team won the awards for best model and best designer. This experience really made me realize my passion for fashion design. 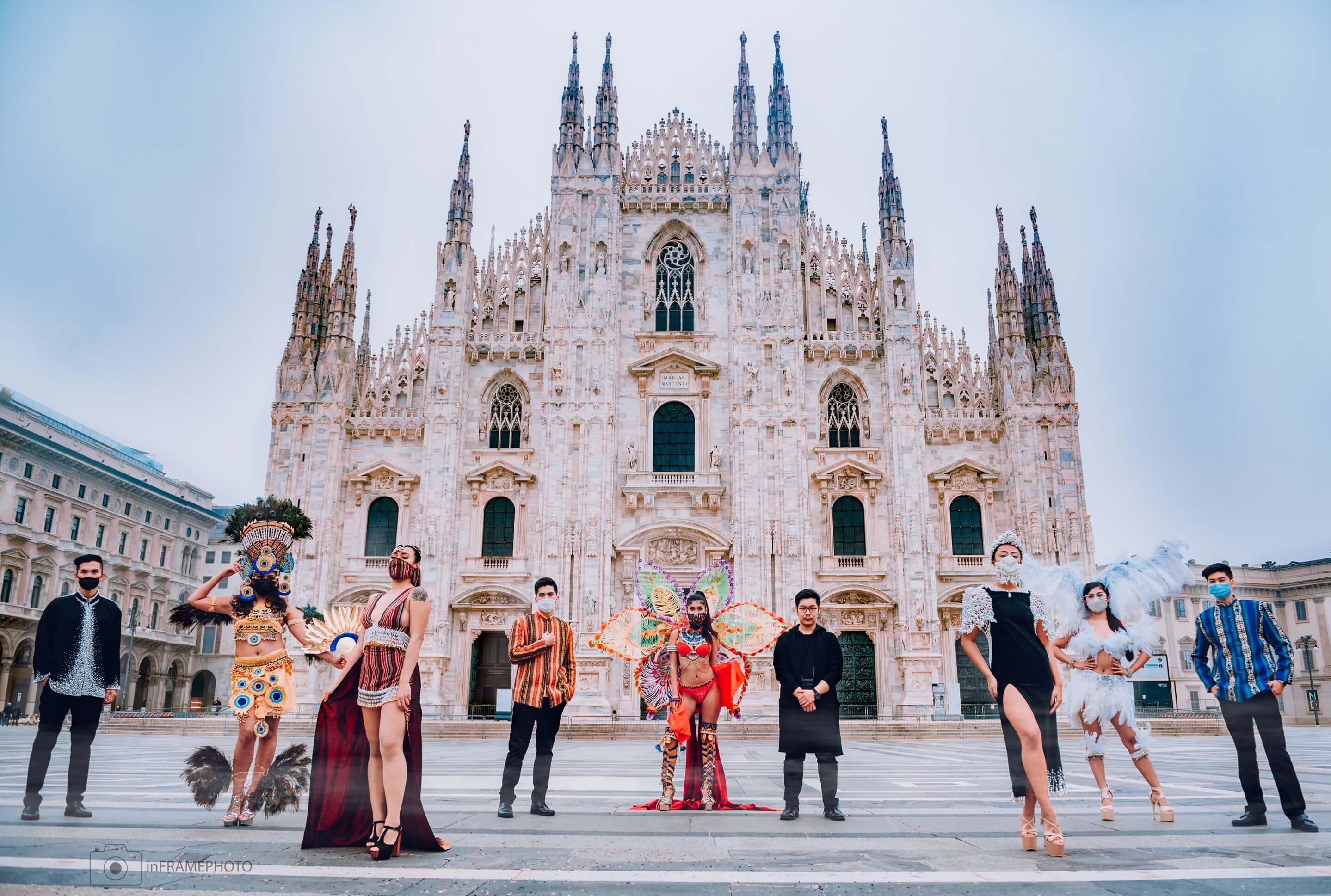 “Just like industrial chemistry, I like to know the materials I work with,” he says. Source: Lionell Christian Lanuzo

Another great memory is last year, I was chosen to represent the Philippines at the consulates long night in Germany and was able to do a fashion show in straight sets during the event. Most of my designs depict my roots as a Filipino designer, from materials to weavings and fabrics.

The show was a total success and was featured in various media and online publications. It was a proud moment for me to be able to support my profession over the years, to evolve further and to realize that I have a lot to learn and to offer. I think it was an “aha!” moment of my career.

When you were studying in Italy, what were the elements of practical learning? Can you apply them to what you are doing now?

I know it’s pretty unorthodox to learn fashion design through chemical engineering. But for me, it helped me a lot. In industrial chemistry, we start by knowing our raw materials, evaluating their composition, how they will react to other materials through a very systematic process, mby minimizing excess materials and maximizing their use.

While studying chemistry, I also really learned to understand the meaning of precision and symmetry. Precision is something I apply using a precise flow of fabric and detail incorporated into my designs. With symmetry, the balance between comfort and style is important. 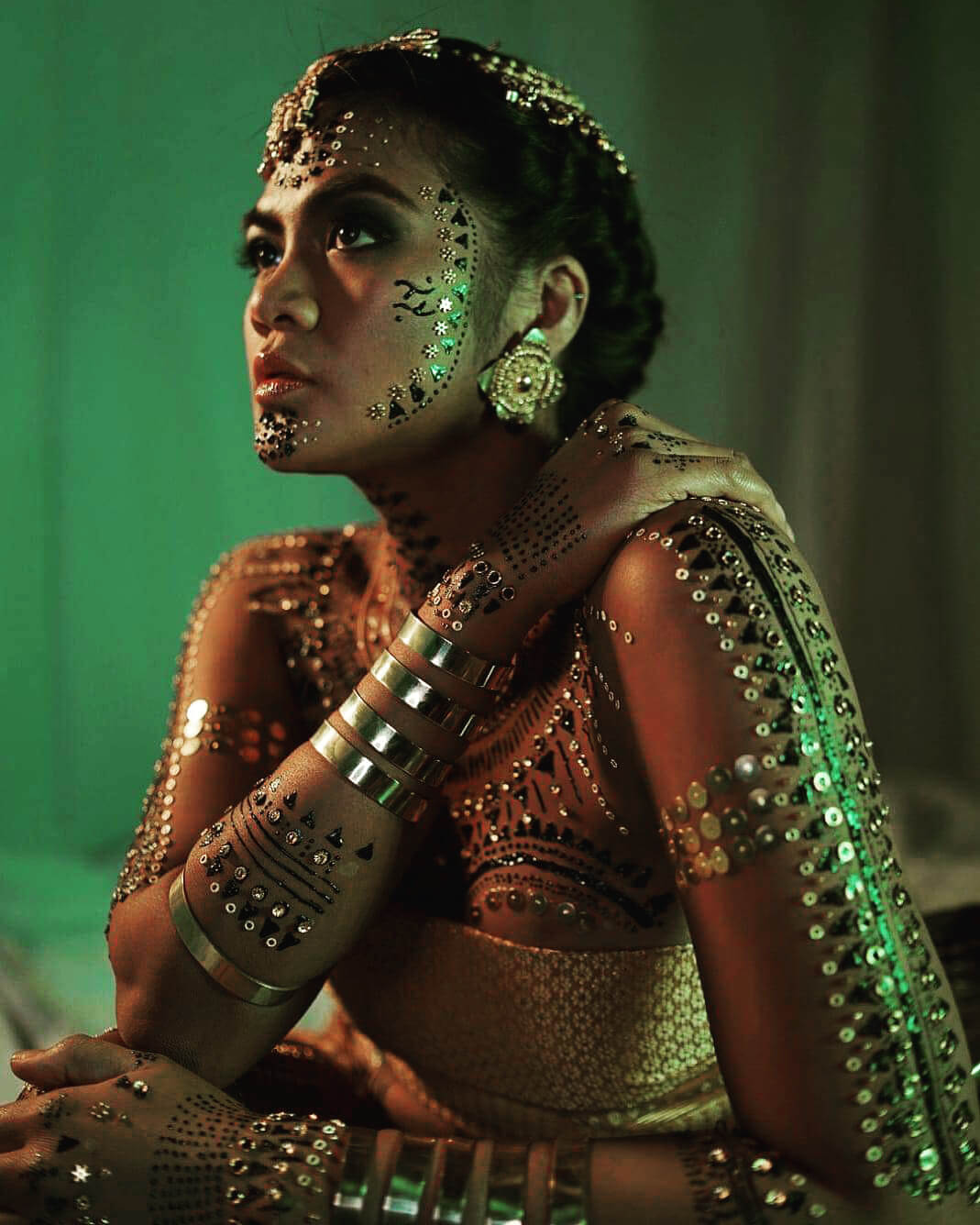 “After I graduated, I started working as a receptionist in a hotel just to do something while waiting for some companies to respond to my applications,” says Lanuzo. Source: Lionell Christian Lanuzo

What more would you like to learn during your studies?

Skills and knowledge in fashion design. It’s only now that I’m learning to sew intricate patterns and learning the name of each stitch, cut and fabric.

Do you have any advice for international students wishing to study in Italy?

Know what your passion is and what you really want to do and become. Whatever difficulties you may encounter on your journey, they will turn into an opportunity to grow.

In addition to knowing how to pay the tuition fees, you should look for accommodation. The Italian government offers bonuses, financial assistance, and sometimes accommodation and meals options for students. If you love what you do, be passionate about learning and you will always find a way to solve all your problems.

Where do you see yourself in 10 years?

I never intended to venture into fashion. I was more focused on getting a normal office job, starting my own business, and starting a family. I guess it turned out to be better than I had in mind. 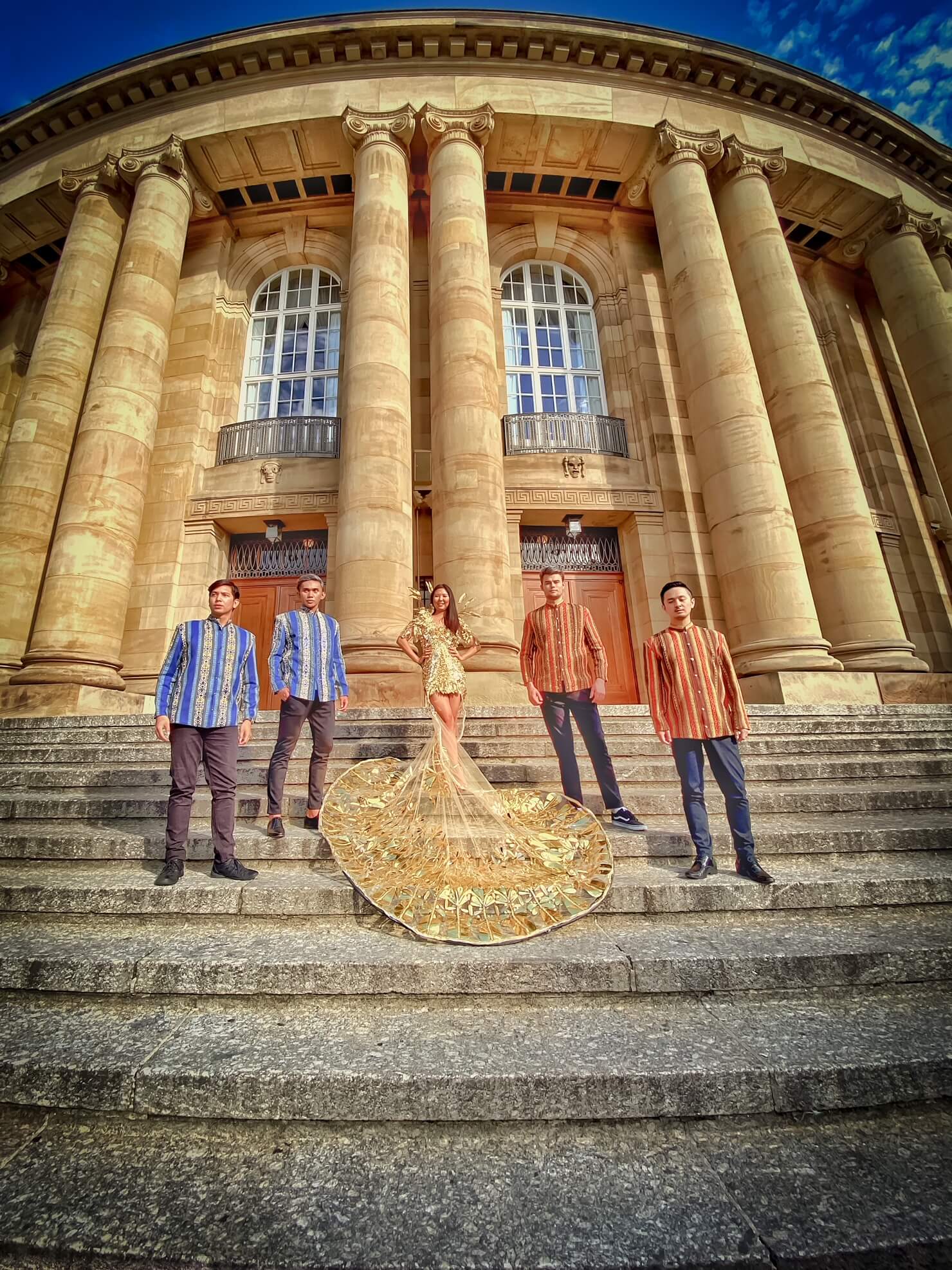 In a few years, I plan to open my own store in Milan and of course return to the Philippines. I hope to make other creations and designs, teach future designers what to do and share my experiences with them. Doing something that I love and at the same time making money from it means that it’s not really work, but a dream job come true.

What do you miss the most at home and how do you replace it?

I’m missing a lot of things! The cooking, the summer vibes all year round, my parents and friends. Fortunately, there is a huge Filipino community as well as restaurants that serve authentic cuisines here. It helps a lot when I want something that reminds me of my home. 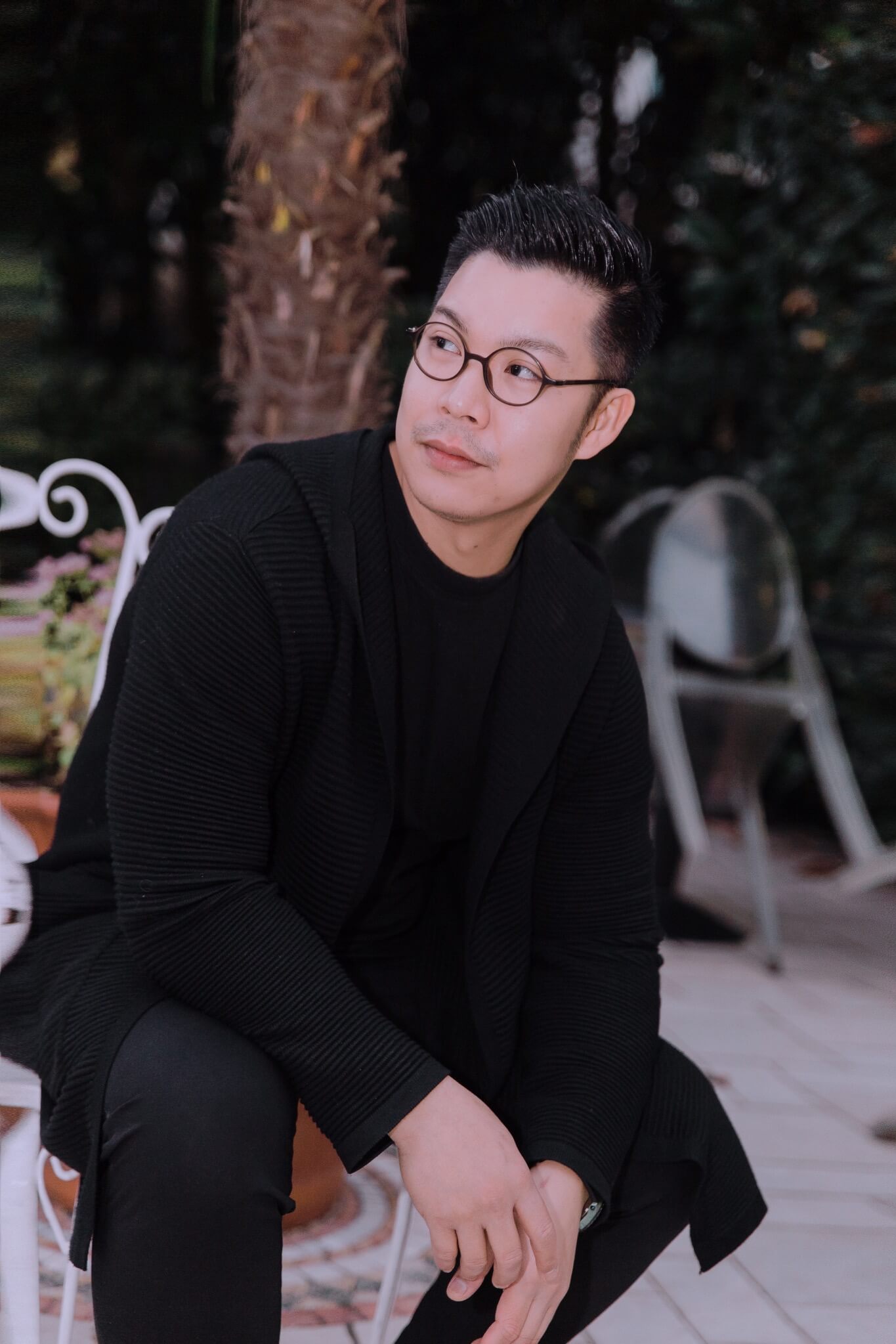 “Usually I’m asked why I waste time being just a receptionist when I can get a better job, but I’m happy with what I’m doing. »Source: Lionell Christian Lanuzo

Do you have any useful tips for international students to budget their finances wisely in Europe?

First, find a place to stay. Rooms, dormitories provided by universities or governments are generally inexpensive. Get to know your whereabouts, such as where the nearest supermarket and laundry stores are. Ask around for restaurants that serve authentic Italian food but are inexpensive.

Usually on Tuesdays and Saturdays there are markets where you can buy anything cheaper than supermarkets. Get a monthly ticket for public transport (around 30 euros for students) which will be extremely beneficial for your wallet, especially when traveling in town.

Previous 10 best fall costumes and how to get them

Next "Craziest Thing I've Ever Done": How In the Heights pulled off their most spectacular dance numbers | Dance